Today we’re chatting with Noah, a Senior Software Developer on the Map Automation team. We discuss his journey at Mappedin, the First Responders project he’s working on for DHS, advantages of Mappedin’s internal hackathon, and advice for a Software Developer applying to Mappedin.

Noah, thanks for chatting with me. To begin, can you tell us about your current role at Mappedin?

I’m a Senior Software Developer on the Map Automation team. My role is collecting data, building machine learning models, looking at research papers, writing APIs, and building applications on top of those models and retraining them to make them smarter. 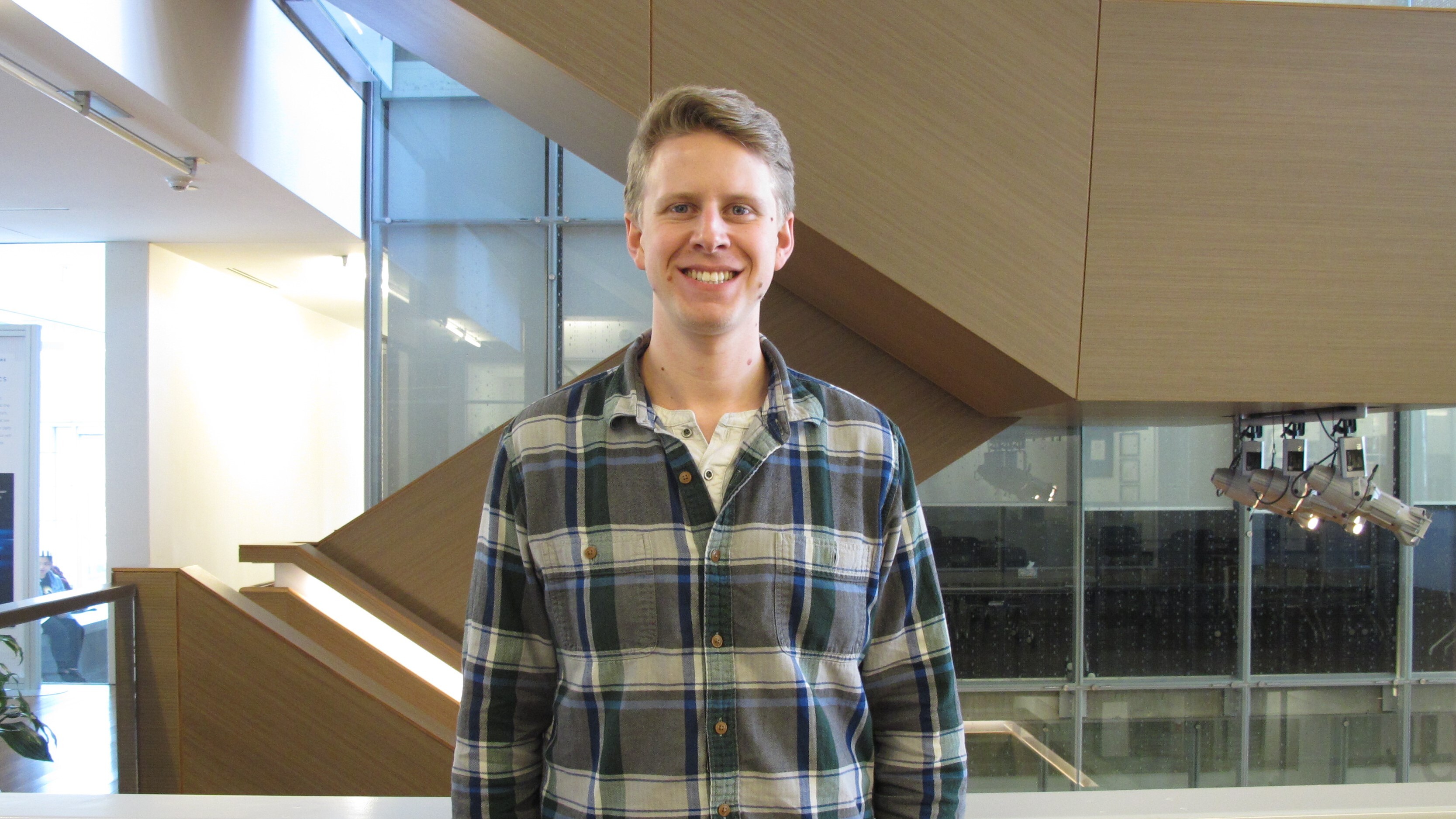 You started at Mappedin as a co-op student, and later transitioned into a full-time employee. How has your journey been over the years?

After that, I graduated and was going to do my Masters. I was working at Mappedin for about 8 months between the end of my undergrad and the beginning of my Masters when Paul, the Director of Engineering, asked if I wanted to stay at Mappedin. I said yes and have been working here ever since.

What are some changes you’ve seen since joining Mappedin?

I was a co-op at the start of the mapping automation push, and I think the only machine learning product we had at the time was Smart Search. I’ve seen a shift in the focus of dev efforts growing into mapping automation a bit more. Before it was very much like, we’ll see if it works and if it doesn’t, we’ll put you in different roles. But we got stuff working, and it’s been growing.

Now we’ve shifted our focus to building up these automation products, and we’ve been working on a huge First Responders project for the U.S. Department of Homeland Security (DHS).

Can you tell us more about the First Responders project the Map Automation team is working on right now?

We’re working with firefighters and first responders to digitize maps that may save lives. Mappedin’s proposed solution will automate the conversion of existing scanned floor plans, which every first responder organization or city permit office has, into simplified, standardized maps. We’re also creating a situational awareness dashboard for first responders to tag areas on the map with icons.

It’s a very niche problem. Where everyone and their mother is trying to build a self-driving car, we’re detecting fire symbols in floor plans. It’s unique which is challenging because it’s difficult to find people that have done similar work, but also exciting because you could be the first to come up with it.

There are a couple research groups that have done this type of work, but the difference between academic and real world applications is that the data in this research is very standard and controlled. However, in real life, we’re seeing all sorts of different data, from really nice CAD files that a CAD expert has drawn, to a hand drawn floor plan pulled out of a filing cabinet.

What’s most interesting is that one of the techniques we’re using is a pretty common machine learning technique, but the other ones are very new and exciting. I think that’s a cool thing that we’re doing; applying new techniques to this really niche problem. And a problem that if we solve, we could be one of the first mapping companies in the industry to achieve genuine map automation, which is really exciting.

What do you like most about working at Mappedin?

What I like most about working at Mappedin is that even though we’re a mid-stage company, you still know pretty much everyone. I’ve had a chance to talk to most people at Mappedin and understand relatively deeply what everyone is doing.

This also leads into horizontal as well as vertical movement in the company. Mappedin is very good at promoting employees in the company, and horizontally, there’s always the opportunity to work on other projects. For example, if I wanted to learn front-end development after completion of this mapping automation project, I could jump into a couple sprints with a front-end team to try it out. I don’t think you can really do that at some other companies, so it’s one of the main reasons why I like working at Mappedin.

Mappedin recently hosted our internal hackathon event, Hackedin. Could you tell us more about that? What are some of the advantages of participating in this event?

Mappedin hosts hackathon events to provide developers with opportunities to work on projects that are outside the scope of our regular sprint work. The last one was focused on integrations, where we were integrating existing Mappedin tech with something else, and my group did a fire simulator. I think one of the advantages of Hackedin is that it gets you out of your regular project work, which can be a really good thing.

Hackedins can kick off new projects and ideas that people may not have come up with if they were just doing their regular sprint work. It also gives you the opportunity to make incremental features to Mappedin products or pitch a radically new feature that you can build at Hackedin and beyond that too.

For my team, we learned a new tool in the programming language that we use (Python) and we found a new potential use case for the type of work that we’re doing. Before, we never really thought about running simulations for fire departments, so Hackedin was a great way to do something really interesting.

We’re hiring for many developer roles currently at Mappedin. Why should a developer come to Mappedin right now?

I think there’s a lot of opportunity for any type of developer. Right now, we’re hiring for two Team Leads, a Full Stack Developer, a Front End Developer, and a Developer Evangelist (see our open roles here). In the dev manager book club, we’re reading a book called Radical Candor that identifies two types of people: a superstar and a rockstar. A superstar is someone that is always looking for the next role or to grow in their role, while a rockstar is someone who is really happy in their role and the first person you’d go to if you have a question about a specific product they’ve been working on.

That is like the two types of developers; there’s some that just want to lock themselves in a room and build features all day, and others that want to talk to product managers and designers and focus on all types of things. No matter which type of developer you are, there’s a place for you at Mappedin.

I’d say that our tech is very modern as well, and the tech I’m working with in the machine learning space is quite new. All of our practices on the dev team are very new as well: test-driven development, TypeScript, and other top of the line practices. Also, Hackedins are a great example of the fun that you can have with your work.

Do you have any interview tips for a developer who wants to apply to Mappedin?

I actually just started shadowing the hiring process and did some co-op hiring. I would say that communication is huge. Whether you’re going through a technical process, or the more behavioural type of questions, you should constantly communicate. If you’re working on a technical question and you’re not speaking your mind, the recruiter won’t know what you’re thinking and won’t know how to help you if you need help. Also, if you struggle a bit with the technical questions, but you’re talking the whole time and collaborating with your interviewer on how to come up with a solution, you’ll do well.

And don’t sweat it! A lot of people get really nervous in interviews, but we want you to succeed. The hiring process takes a lot of time and effort, and we don’t want to go through all of that just to trick someone and miss out on a great developer.

Also practice. I think everyone in software development knows to practice the LeetCode questions. We’re not as heavy on those as other companies, but we do ask those types of questions.

Overall, my advice is to do a bit of practice, know that we’re not trying to trick you, don’t sweat it, and communicate.

Interested in working with Noah? Check out our Careers Page for all open roles, or send an email to our recruitment team at careers@mappedin.ca.

Paul is Mappedin’s Director of Engineering. We’re discussing his journey at Mappedin, some cool things the Engineering team is working on, and the hiring process for a software developer. Paul,...

Jere is a Developer Evangelist at Mappedin. Joining us from Finland, we're discussing his experience working in a different time zone, some of the cool things he's working on right...

Hi Jim! First of all, a huge congratulations on 5 years with the company! It must have been quite a journey considering how the company has grown. How do you...