While we are often focused on the current and future states of mapping, we rarely get a chance to examine historical methods and how they have had an impact on how we do things today. We want to pay homage to the many different types and styles of mapping, and dig into how we got to where we are. Welcome to Mappedin’s History of Mapping.

There is a distinct dynamic that comes with physical mapping that differs from digital 3D mapping, often times having a much more cultural focus. One thing that also becomes clear as more artifacts are unearthed - many cultures have had established methods of navigating and wayfinding for centuries; these systems differed greatly from Western mapping principles. Just as cultures have had different calendars based on the important events they wanted to mark and ceremonialize, so too have they had unique methods of interacting with the world around them. Systems based on religion, or directions of ceremonial locations; even systems based on planetary alignments, or the ocean, have been found over time.

In 2018, a paper from German professors Lars Eckstein and Anja Schwarz was published detailing the specifics of a map originating from Tahiti. Initially, the project was created to discover the differences in how Polynesians created their maps, and what parameters they used that differed from Western methods. However, they soon zeroed in on one map in particular, due to the complexity and seemingly nonsensical style of recording. Created by famed Tahitian navigator Tupaia, this map has baffled historians for centuries. 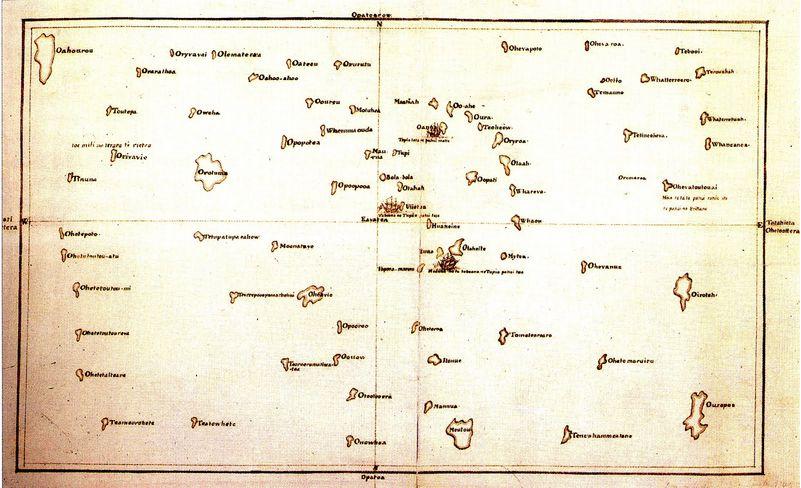 Tupaia was a figure from Tahiti who was known to be a navigator, but was also a translator, political advisor, and religious dignitary from the 1700s. His map depicts an area known as the ‘Society Islands’, a range in the South Pacific. Tupaia created the map while he was on board the ship Endeavour as a translator and navigator with explorer James Cook from 1769 to 1770.

Because the map used cardinal directions which did not seem to line up with the ones we are familiar with, it was deemed incorrect and useless, kept for its age and as an important cultural artifact rather than for accuracy. The map also depicted a number of islands that researchers could not identify, as well as ones that existed under different names.

In actuality, Tupaia’s map was an exercise in cultural differences. His map was actually incredibly accurate, once viewed through the right lens. For instance, his European counterparts aboard the ship with him viewed the world as stationary and the individual as moving through it. For mapping, they measured their location using longitude and latitude, and then created a travel route from there.

Tupaia and the Polynesians viewed themselves as stationary, and believed that the world moved towards them. Tupaia used noon, or “avatea”, also known as the time of day when the sun is at its peak. In order to read the map, you treated every island or land on the map as the centre (depending on where you were), getting your bearings by looking at ‘noon’.

Tupaia’s map was the first recorded map to use what could be defined as a roving scale, or utilizing interactive directions. With this in mind, what other differences in how we interact with the world around us exist? Which ones are prevalent? Which ones are not?

In addition to the cultural aspect, this showcases that navigation methods are most effective when they are created and optimized to show the most important thing in a culture, society, or organization. If we apply this to our current product line while also staying within accessibility and law guidelines, putting forth the right information (and also allowing translation for that information into different languages) ensures high usage and satisfaction.

We’re going to continue to explore some of the history and culture around maps and how it can apply to what we do today in the familiar world of digital 3D mapping. Make sure to keep an eye on the blog for the next instalment!

History of Mapping: Cartography to Digital and Everything in Between (Part 1)

While we are often focused on the current and future states of mapping, we rarely get a chance to examine historical methods and how they have had an impact on...

History of Mapping: Cartography to Digital and Everything in Between (Part 2)

While we are often focused on the current and future states of mapping and wayfinding, we rarely get a chance to examine historical methods and how they have had an...

GIS for the Non-GIS User

In today’s world, there is a lack of efficiency in how people interact with and navigate the indoors as well as how companies manage their property maps. The average American spends...